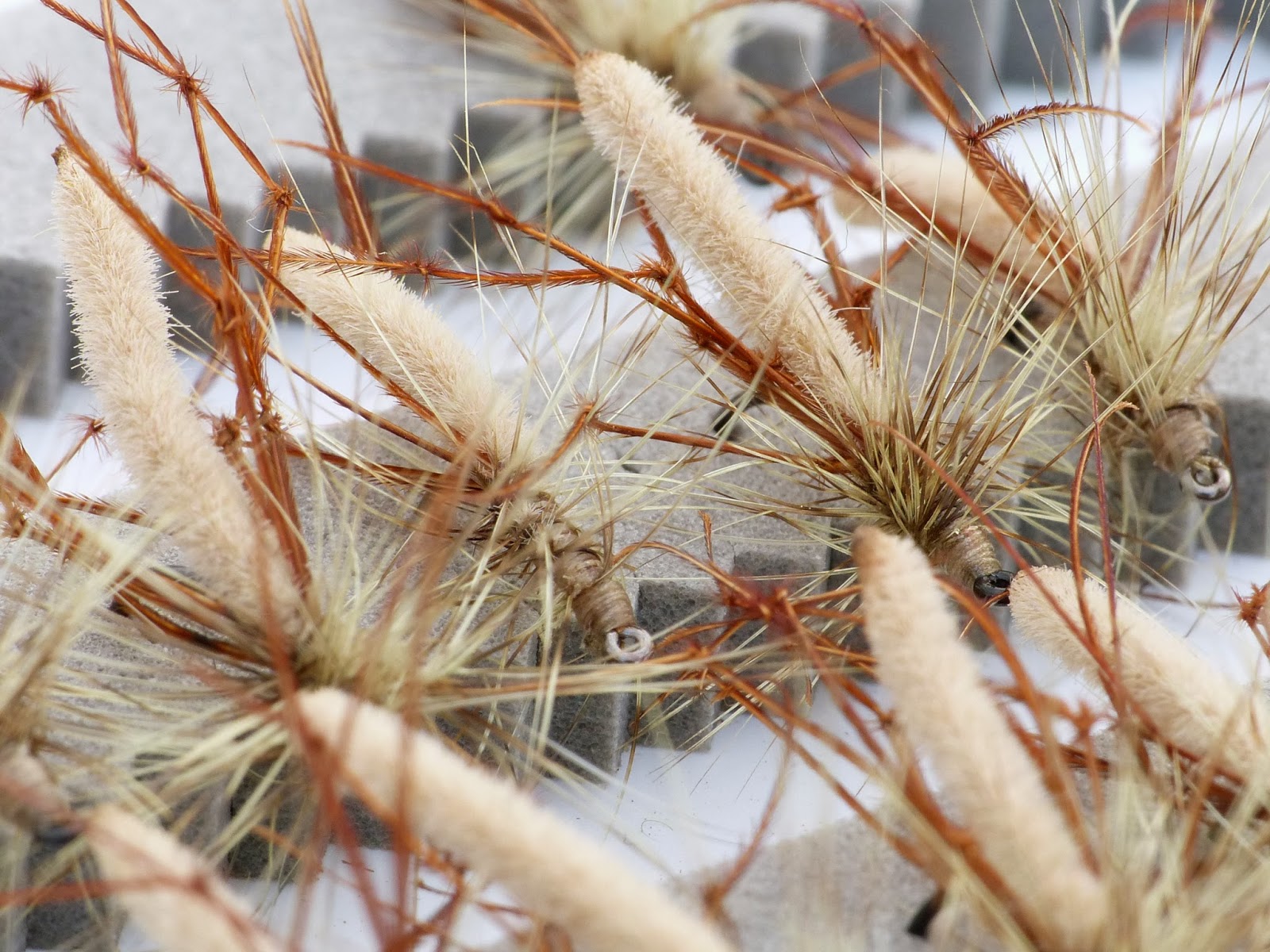 It would be fair to say that most anglers have used a Daddy imitation at some time or other for rainbow trout. It is the first fly I can remember catching on when I first learnt to fly-fish on one of Simon Gawesworth's famous flyfishing courses in deepest, darkest, Devon. I'll never forget watching my Daddy disappearing in a big swirl as a large rainbow swallowed it at Exe Valley Lakes as Simon looked on. Simon has of course since moved on to much greater things: author of some superb casting books, star of casting DVD's and now lives in the US and works for Rio Products. He is regarded as possibly the greatest Spey caster in the world and he was a brilliant teacher. His courses were superb, are missed by many and I feel honoured to have met him and been taught by him. Anyway, I digress, back to the Daddy Longlegs...

...It's a fly I have used to great success throughout my flyfishing 'career' for rainbows in lakes of any size, from tiny one acre small stillwaters, to huge reservoirs. I have caught many stillwater/loch brown trout twiddling a team back towards the bank on a floating line. Trout take it very confidently, as they do with its smaller, close relative, the Hopper family of flies. However, I had never used a Daddy imitation on a river for brown trout. John Roberts writes about the Daddy Longlegs in his book 'A Guide To River Trout Flies" and offers readers two imitations. He recounts a time when he saw a natural taken by a trout in a river and confirms that he has had success with it on rivers. I dismissed this as a rare occurrence and decided it wasn't worth carrying an artificial.

Jump forward to 2012 and I met Dave Southall of tenkara fame for the first time. Dave is one of the most knowledgeable and capable anglers I have ever met. He is also one of the nicest people you could ever meet, and freely shares his experience with anyone sensible enough to listen. I fished with him on the Yorkshire Derwent and Pickering Beck, east of the Yorkshire Dales in the North York Moors. He talked about the Daddy being one of his favourite flies and practically the only one he uses on Thornton Beck for its little wild brownies. When he showed me the imitation he used I was immediately impressed with it, as good as any I've ever seen and you could see why any trout would snaffle one.

He gave me a sample and full tying instructions and I tied a few for my own flybox that winter. It wasn't until the following year, June 2013, that I gave the Daddy a wetting for the first time - on Thornton Beck with Dave Southall. Along with my 6 foot rod it was the only fly I would need he advised and warned me that I was in for some proper "jungle fishing". He was right on all 3 counts, the trout in that beck were absolute suckers for the Daddy fished upstream on the 6 foot rod. We caught a lot of trees that day, spooked a load of fish too, but we had stacks of little wild brownies all on a "Dave's Daddy". A thoroughly enjoyable day was had and I'm hoping for another invite in 2014!

My new found success with the Daddy wasn't confined to this day and this beck. With the confidence gained during the day on Thornton Beck I have since fished the Daddy on other rivers and I can vouch for its attraction to trout. I'm sure it would work on any river, but I do  tend to lean towards it more on the smaller rivers and streams, probably due to my introduction to it. Running it down foam lanes next to overhanging branches you are just waiting for a greedy trout to stick its head out and swallow it.

Take it from me this is a top fly and a relatively easy tie, so tie a few for this season and I promise you won't be disappointed. The dressing is as follows...

*I used Veniard pre-knotted Pheasant Tail when I tied my last batch and was very impressed with them - speeded the tying up greatly.
Posted by Unknown at 16:20

Other Sites of Interest